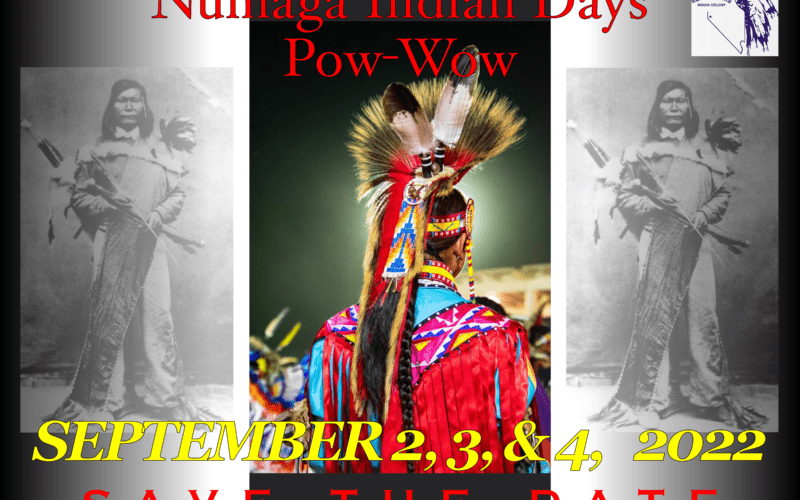 The sound of drums fills the air as hundreds of dancers and participants move around the dance arena, using dance styles and steps that match their dance ‘regalia’.

Men will dress and dance in styles such as Northern and Southern Traditional, Fancy Dance, Grass Dance, and Chicken Dance to name those most commonly used.

Women, likewise will dress in cloth and buckskin outfits in both Northern and Southern Traditional styles, Jingle Dance and Fancy Shawl Dance styles. Inside the pow wow circle, the grand entry which features all the performers, begins with more than a hundred dancers grouped by their dress style led by Native American military Veterans.

In between dances, spectators may take their energy to the hand games–traditional gambling that has been played for thousands of years. It is a guessing game involving animal bones and sticks with a background of songs and drums, used to distract the opposing team.

The Numaga Indian Days Pow Wow features more than 25 vendors selling native foods like fry bread and handcrafted bead work and blankets to share their native culture with the outside world.

Your trip to the to beautiful Hungry Valley will be worth it just for the fry bread.

History of Numaga Indian Days Pow Wow – The Numaga Indian Days Pow Wow is named after Chief Numaga, the famous Paiute Chief, known for peace. Chief Numaga was a great 19th century leader who had the courage and the vision to counsel against war. Facing severe threats to his people by invading white forces, Numaga repeatedly chose peace. His successful peace negotiations, helped set a precedent for future disputes.

Numaga also has a documented history of trying to preserve the destruction of our aboriginal lands. Numaga called the pine nut groves, the Indian’s orchards and asked whites to collect fallen timber instead of cutting down healthy trees. Unfortunately, Numaga’s early advocacy for Mother Earth fell on deaf ears. Translated from the English language, Numaga means “Give Food.” He passed away in 1871 and is buried in the hills near Wadsworth.